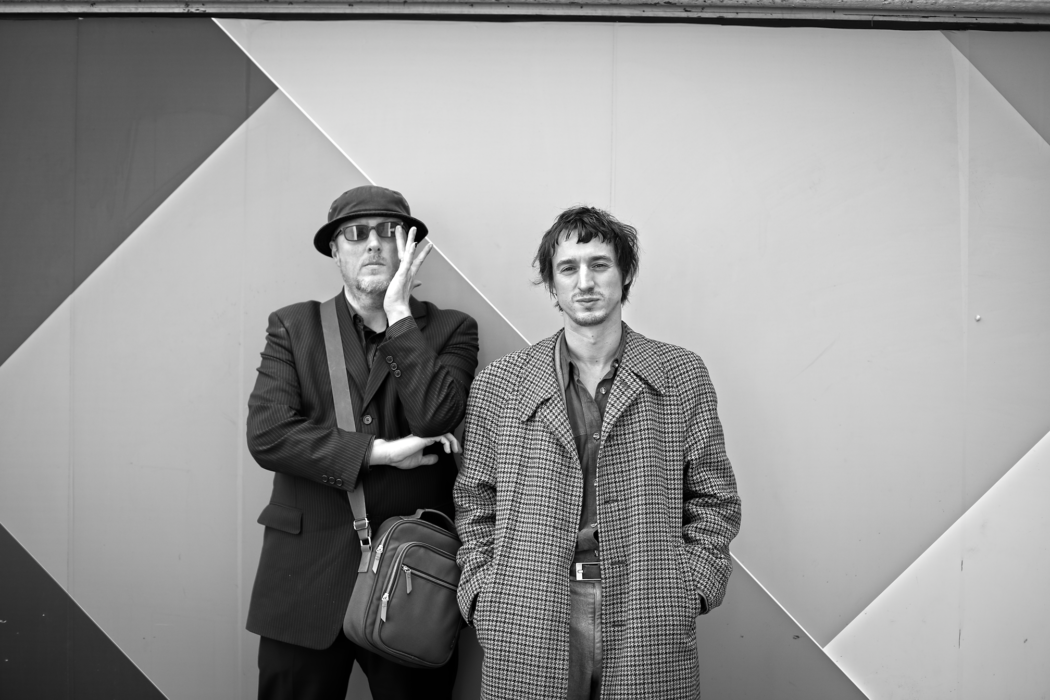 Even moments later, it was hazy recalling exactly what greetings had been exchanged with Lias Saoudi and Adrian Flanagan of The Moonlandingz, who both possess an aura of steady, eyes-front nonchalance; an unintentional coolness that seems to squelch meaningless chitchat and swallow up all the awkward pleasantries of the real world. The memorable thing was being swept up so suddenly into their silent procession through NYC’s South Street Seaport, mere seconds after we intersected, marching in a surreal lockstep amid the nautical prestige of some of Manhattan’s oldest buildings. Lias led the way to the bar with hands deep in his pockets, his large brown coat unfolding like bird’s wings against the salty afternoon breeze. If there were morbid thoughts on his or Adrian’s mind – as one might expect from two of the dark artists behind Fat White Family and the Eccentronic Research Council, respectively – you’d never guess it. Their composure made space for some mind-bending analysis of their music and how it’s perceived, which poured out like honey as soon as we sat down and spoke.

“It’s rooted in electronic much more thoroughly than Fat Whites is. There are more comedic elements to it. I think of it as kind of like a B-movie band. The tongue is almost bursting through the cheek,” explained Lias pensively, when asked how he’d describe the Moonlandingz project to those who only know him from Fat White Family. “Like B-movie pop music,” agreed Adrian, whose initial concepts are what brought the self-described ‘fictional band’ into the universe. “But it’s kind of my idea of perfect pop music,” he said. “Whereas Fat White Family are an out-and-out rock and roll group – a for-real rock and roll group.” “Fat White Family is more about the dismantlement of my soul,” Lias chimed in definitively, cracking a wide smile. You could sense the guys were in good spirits before their NY tour stop at Rough Trade in Brooklyn (tonight! tix here) – though the jury’s still out when it comes to their own existence. 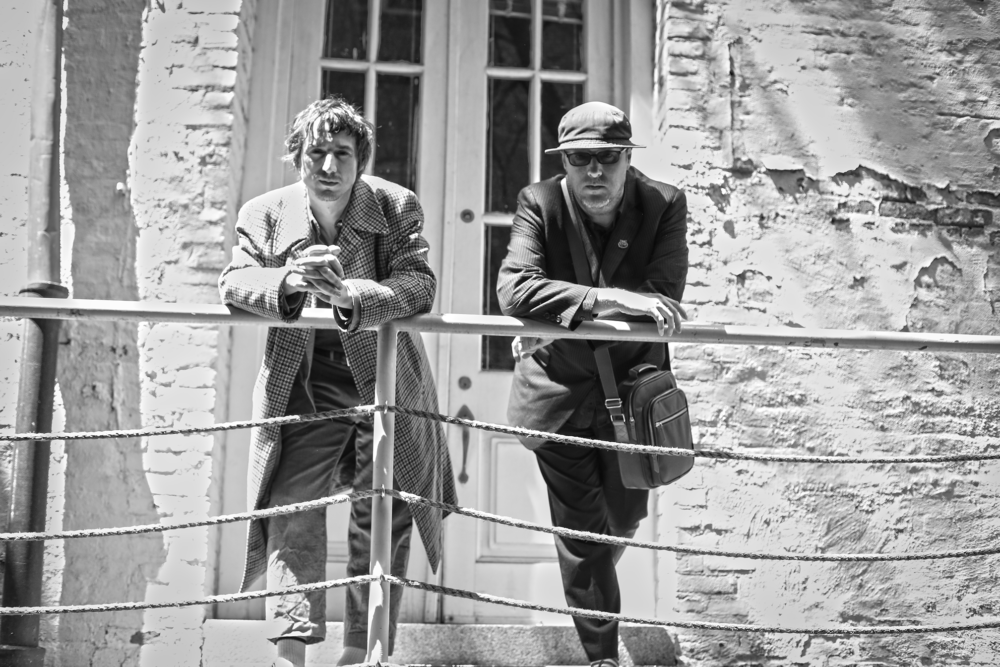 “Yeah, we’re a hologram,” said Adrian with a wink, as they contemplated whether they still consider themselves a fictional band – especially with their debut album, Interplanetary Class Classics, now very much a reality. “I guess elements of that are true,” said Lias, who explores the role of a fictional frontman under the pseudonym Johnny Rocket when he’s performing with The Moonlandingz. “If you’re in a certain character, then you can get away with making fewer excuses for what you put out there. I can behave in a certain way without having to apologize. So it serves a practical purpose for me,” he elucidated. “A performance art element is something I’ve always been interested in. I don’t really come from a musical background; I come from an arts one – went to art school and all that business. So any way of incorporating that into a project is something that appeals to me. I mean how else do you make performing the same song every single night amusing to yourself? The novelty wears off after about three years, so you’ve got to try to find a way of keeping it interesting, just for yourself. I think all that carrying-on – that’s what it is for me.”

That carrying-on recently led to some surprising collaborations on The Moonlandingz’ just-released LP, among them Sean Lennon (who co-produced it), his mother, Yoko Ono, Rebecca Taylor from Slow Club, and even Randy Jones, the cowboy from The Village People. “It was nice for me, coming out of Fat Whites, just to have other people who were quite serious about what they were doing, who take an element of professionalism to their work, invite you to come and be a part of it,” said Lias. “After like 5 or 6 years of playing for empty rooms and being on welfare, it was nice to all of a sudden have a few options of other people to work with. To not really have to worry about it; to just sort of put stuff out, without it feeling like the end of the world every day.” On the topic of Randy the cowboy, The Moonlandingz were equally enthused. “You know when somebody’s better than how you imagine them to be? You know, you imagine them to be a certain way, and then they’re even more that way than you expected? That’s Randy,” said Lias. “He’s even more Randy than you’d think.” “I would have felt we’d let our fans down if we did not have Randy Jones from The Village People on the record,” professed Adrian. In the frenetic context of Fat White Family, which Lias admits can be more of a collaborative challenge – “A band is like a collection of conflicts that eventually resolves itself into a record,” he mentioned in passing, rather profoundly – the public response is often more explosive than their own wild shows. But even though The Moonlandingz’ work is fueling less controversy, he and Adrian maintain a healthy distance from whatever writers like me are saying about them. “I don’t generally read the press, no. Especially the comments sections. Don’t ever go near that comments section, man. Unless you’ve got some really good cocaine,” Lias advised with a laugh. “If you feel like a really long, drawn-out battle with your own self-hatred, then hit the Brooklyn Vegan comments section. Fat Whites played Paris the night of the Bataclan shooting, and somebody said that they shot up the wrong gig. Which is great, you know? It’s great to read that about yourself…that somebody out there you’ve never met before has reacted to your music in such a way that they wish you had been riddled with bullets by terrorists,” he said with genuine fascination. “Our music seems fairly conventional to me. I don’t really understand what’s so upsetting about any of it. But I try and avoid reading stuff, because it does mess with your head a little bit – reading shit about yourself. Even if it’s good stuff. It’s probably more damaging if it’s good stuff. It’s better to just keep your head in the sand, you know? Just try and get on with your job.”

Though it’s still early to tell, it seems The Moonlandingz may be able to get away with a bit more than Fat White Family, primarily because, as Adrian put it, “the dark stuff is kind of dressed up as pop music.” “Like a Trojan horse of degradation,” agreed Lias. “It’s not as straight-down-the-middle aggravating as Fat Whites I suppose for some people. But it’s weird, I mean, your perception of your own band is just totally removed from everybody else’s. What feels completely natural and normal to you is anathema to lots of other people. Because obviously, some people think you’re trying hard, or trying to be edgy – that’s the most annoying one. It’s like, ‘Okay, so I’ll take a walk back over to the middle of the road then; will that suit you?’ You can’t keep these fucking people happy, so there’s no point, really, in indulging it. One person’s shock is another man’s pedestrian.”

“There is a house built out of stone…” were the first words that I ever heard Patrick Watson sing and from that moment on,…